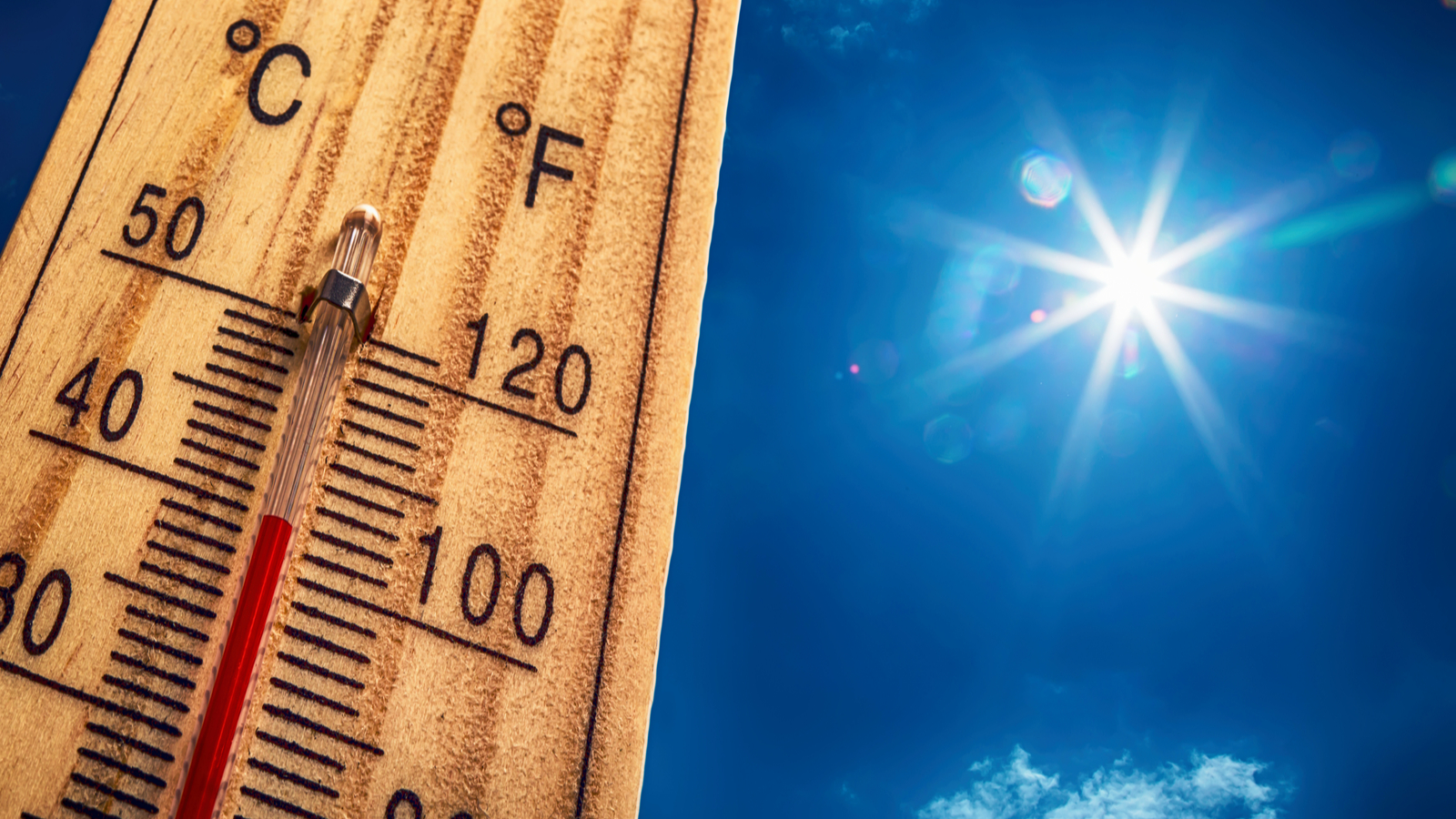 This will be an important week for the stock markets. The S&P 500 has a hard line in the sand that the bulls can use to trigger more upside. If it triggers, hot stocks will lead up in a big way. This bunch does not do anything mildly. Today, we identify three such situations where the upside breakout is almost imminent.

But first we should lay out the case against it. The indices have been skirting with the open air new high scenario for weeks. There has been weakness in that department from the Nasdaq and the small-caps. Not so much the stocks themselves but the indices versus their own highs. On Wall Street they call this “rotation” where the drag from one sector weakness offsets the lift the sector rallying.

This week we will also learn more about inflation in the U.S. If these reports are too hot they could scare investors. High inflation could force the Federal Reserve to taper sooner than their 2023 target. In 2018, the Fed flipped policy from tightening to extremely loose. That has since fueled an outstanding risk appetite. This would not continue if they pull back on the bond buying programs first. And if they even hint at rate hikes then start looking below for corrections.

The reflation trade will help offset these negative scenarios but it won’t stop the selling. Even if the outcome is not a crash, the machines will sell pops instead of buy the dips. And we won’t be looking at opportunities like this today. Instead, I’d be writing on which hot stocks are close to hitting bottom.

For now I look for upside in these three hot stocks: 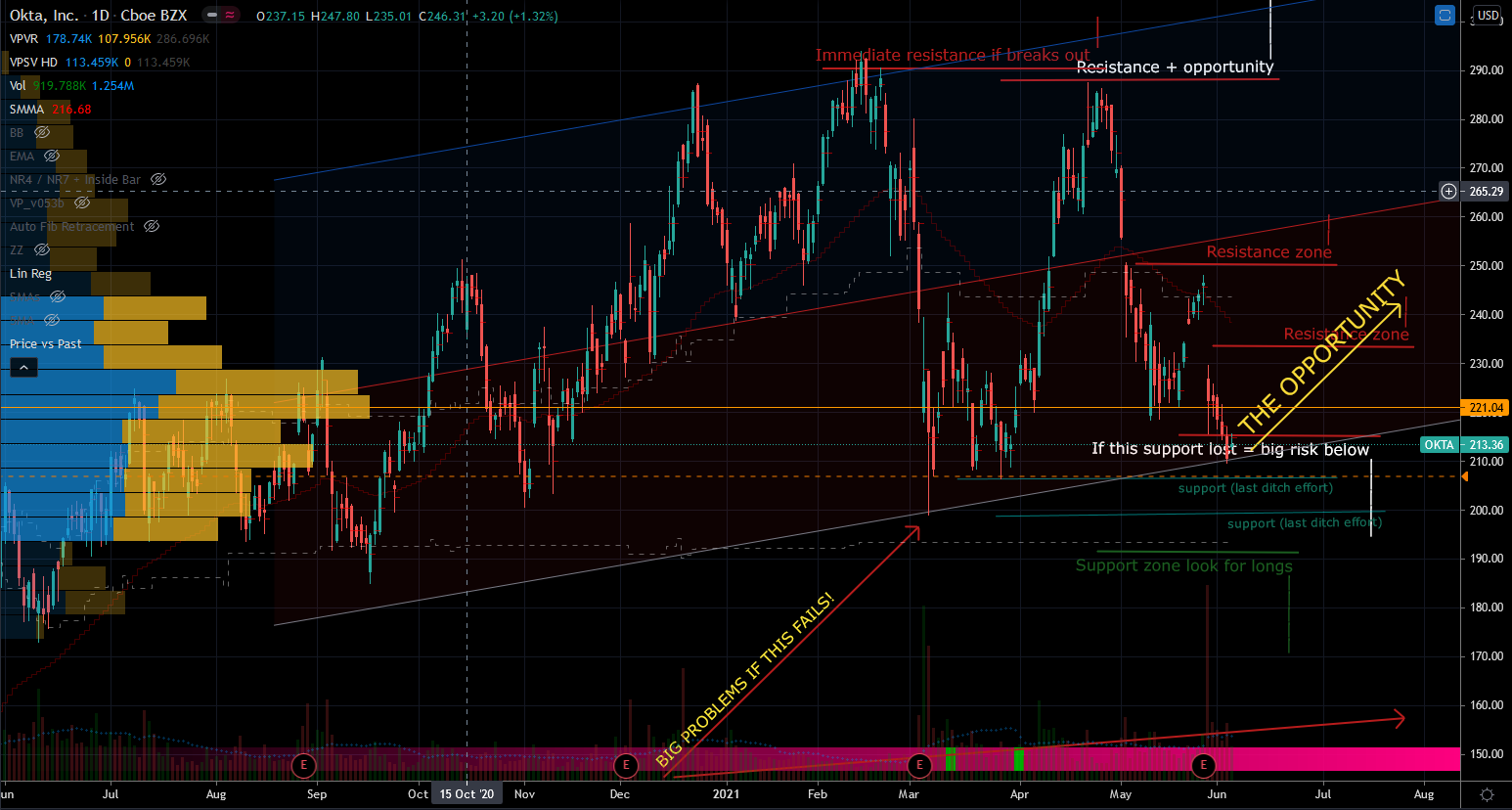 In the age of SPAC opportunities, it is hard to stay focused on those that have a good story already. There is more froth now on Wall Street than I’ve ever seen. Long-shot hot stocks existed but not this many opportunities at once. OKTA stock is one that fell off the investor radars and it’s an opportunity with meat on the proverbial bone.

The fundamentals are great as management tripled its revenues in four years. They still don’t turn a profit but that’s typical for growth companies. They can’t deliver the top line expansion while skimping. It is necessary to spend a lot to build up a strong book of business. When a management team is confident and posting strong results, I trust them. Recently, they reported earnings and they raised guidance, and that’s all the evidence I need. The future is bright for OKTA stock as long as markets are bullish.

Technically, it is falling into support and that’s good reason to brave a bullish bet. In the past, I have written about such opportunities where investors were wrong to sell OKTA stock. They delivered excellent results over 200%. I believe buyers now will have a jump start on the rest. The bids will come back and the only thing that could foil them now is the whole market. A slip in the indices could also put selling pressure on OKTA. Otherwise, getting long now with a tight stop is not likely to be a financial debacle. 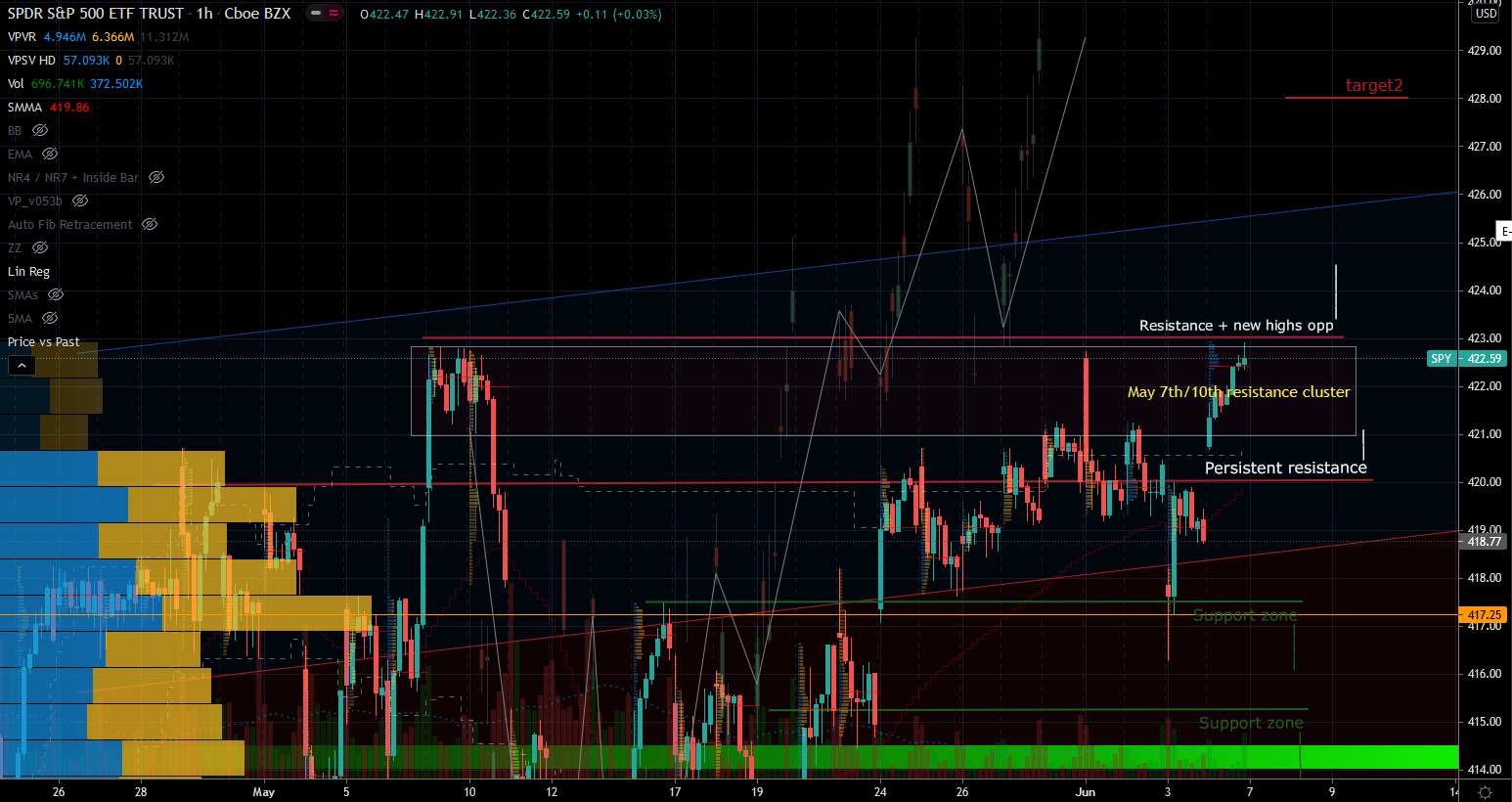 Earlier, I noted relative weakness in the Nasdaq. The SPY stock, on the other hand, was as frisky as can be last week. It is the closest to a breakout among the major indices, and this week could be exciting. My only apprehension is that it could be too easy a set up. When the opportunity is this obvious, I get a bit suspicious. Easy lay-ups like this are rare especially in the indices.

Luckily, using options traders can set up many cheap trades that could profit from the breakout. Options can reduce the out-of-pocket expense, especially with strategies like bull put spreads. These don’t even need a rally to profit. Another popular and relatively cheap way is to buy call spreads.

Why am I excited and leery at the same time? Ten cents separate the last three SPY stock all time high candles. This includes the close on Friday, so the bears don’t have room to snooze. Fundamentally, stocks are at extremely high levels but are not necessarily expensive. We have a fake Goldilocks scenario that is allowing this strange status quo. There is extreme inflation in all the right places. By that I mean that the CPI has not registered it, so the Fed is still all in. We all know everything is more expensive and that is keeping company P&Ls in check. 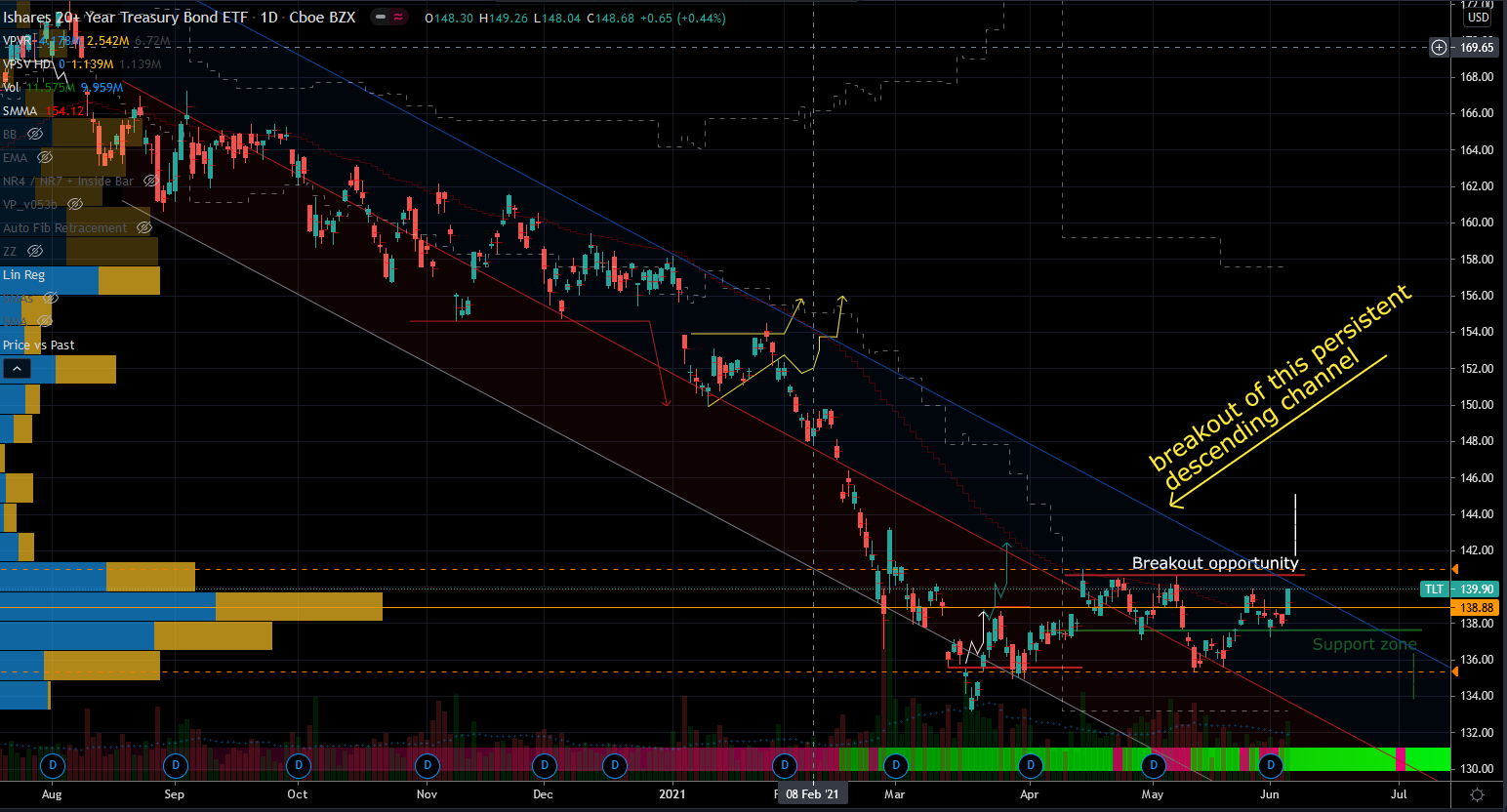 Bond prices have been retreating for months. The effect we called TINA for so long seems to have disappeared. But this could be changing because there is reason for bond vigilantes to smile a bit. It is likely that there is a breakout coming to sustain a rally. Since mid-March, the bulls have held a higher low trend. This is the first ingredient for a reversal of fortune. The next phase is to break down the wall that is at $141 per share.

I wrote about a similar breakout opportunity in early April and it delivered decent results. But the bulls of TLT stock failed to maintain the momentum. The stock faded and even lost the base that was available then. Now it’s back and with better momentum from the ascending trend. The bullish trigger is near and it looks like it setting up to finish the job.

The immediate target if this happens is $147 per share, but eventually could be $153. This ticker has had a few fake out rallies as evident from the descending overall trend. Eventually TINA will bring bids back into it but for now it has not been a catalyst. It is also interesting to note that taking it could serve as a hedge to the SPY opportunity. Often when stocks falter bonds rally. This is not a rule but it happens often enough for me to trust it.

In closing, I’d like to remind the readers that there are no real experts these days. We’ve never had these conditions before so tempering all enthusiasm is smart. In other words, create doubt in your own thesis if you don’t have any. Also keep an eye on the U.S. dollar, which has suffered a similar fate to the TLT. On one hand I get it because the massive stimulus weakens it. But on the other hand, U.S. bonds are the only major ones that pay a positive yield. These two narratives are working against each other and they interfere with the price of the TLT.

On the date of publication, Nicolas Chahine did not have (either directly or indirectly) any positions in the securities mentioned in this article. The opinions expressed in this article are those of the writer, subject to the InvestorPlace.com Publishing Guidelines.

Nicolas Chahine is the managing director of SellSpreads.com.

Sundial Growers Stock Is in the Penalty Box
4 Unshortable Stocks That Are Too Risky to Bet Against
Workhorse Is Now Solely in the Hands of the Speculators
BlackBerry Stock Was Interesting for a Moment
Stocks making the biggest moves after hours: GameStop, Clean Energy Fuels, Clover & more