Just a few weeks ago, I told you that Opendoor (NASDAQ:OPEN) stock had 20X return potential from then-current levels. And I mentioned that it may be one of the biggest investment opportunities I’ve ever come across. The stock was a super compelling one to buy after it collapsed on the heels of disappointing fourth-quarter earnings. 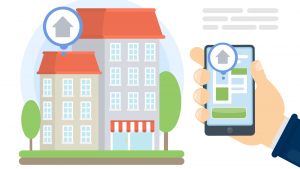 Well, I really hope you followed that advice and bought the dip. Opendoor stock — a core holding in our Innovation Investor portfolio — has soared as much as 54% since then. It’s been one of the best-performing stocks in the entire market over the past few weeks. 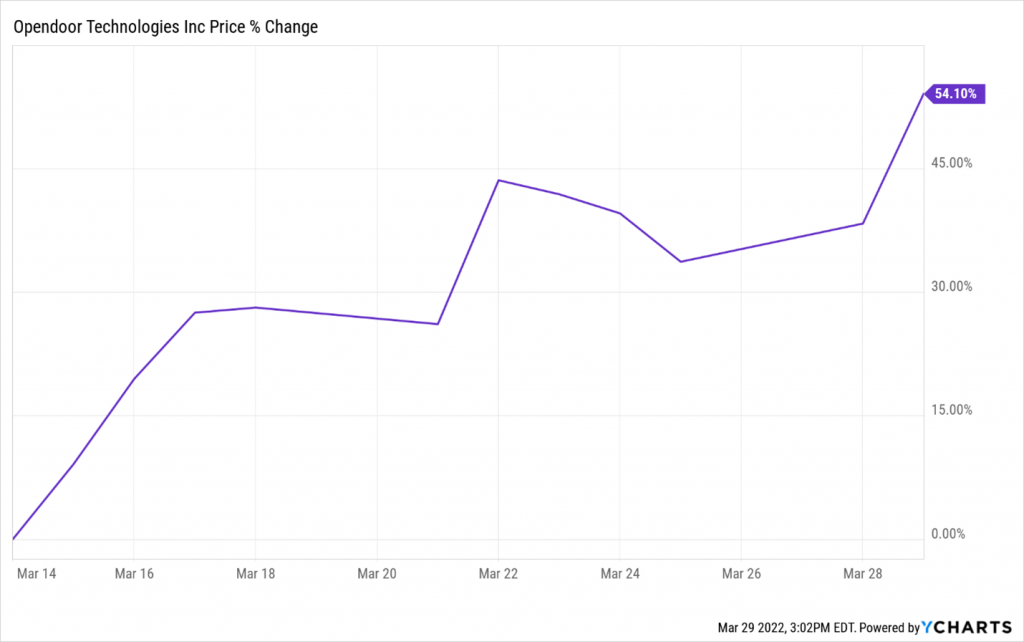 But I’m not updating you on Opendoor stock today to pat myself on the back or applaud you for buying the dip.

Rather, I’m writing to communicate why I believe this big rally in Opendoor stock is far from over.

Indeed, I just came across some unique and important research that underscores that Opendoor’s business is on fire right now. And it indicates the company is going to make a whole bunch of money in the first half of 2022.

As such, I strongly believe Opendoor’s next quarterly numbers will be fantastic. And into and after the first-quarter earnings report, Opendoor stock could soar!

The Most Important Metric for Opendoor Stock

Arguably the most important metric for Opendoor — and any iBuyer, for that matter — is the buy-to-sale premium.

To that extent, that premium is the single biggest driver of profitability of the Opendoor business model.

The bigger the premium, the more money Opendoor is making per home sold and the higher its profit margins. The key to Opendoor becoming enormously profitable, then, is to couple increasing scale with rising buy-to-sale premiums.

Well, we already know that Opendoor is scaling very quickly and growing revenues at a triple-digit pace. And now it appears that Opendoor’s buy-to-sale premiums are finally soaring to record highs, too. This is setting the stage for Opendoor stock to surge over the next few months. And it’s all against the backdrop of what will likely be an enormous “Tech Stock Resurgence.”

DelPrete’s research shows that Opendoor’s national buy-to-list premium has soared in early 2022 to record highs of 17%. Across the U.S., Opendoor’s houses are currently listed 17% higher than what they were purchased for about 70 days earlier. 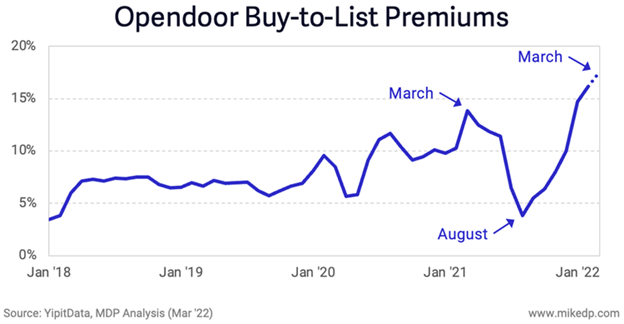 This is the highest reading ever for Opendoor, exceeding the previous buy-to-list premiums record set last March. And it’s well-above where the premiums stood just six months ago (around 5%).

The implication of the surge in Opendoor’s buy-to-list premiums is that buy-to-sales will continue to rise sharply in the second quarter. 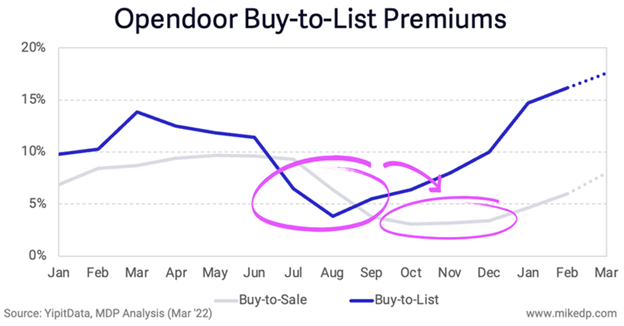 As one would expect, Opendoor’s gross margins correlate tightly with the company’s buy-to-sale premiums.

On average, it appears that Opendoor’s buy-to-sale premiums in a quarter are about three percentage points below gross margins. Therefore, it seems Opendoor should report record gross margins of 15% or higher in the second quarter of 2022.

Why This Matters Long-Term

In short, Opendoor is going to make a lot of money in the first half of 2022. And all that money should help propel Opendoor stock meaningfully high by the summer. I see this stock making a run back above $20 by then.

But that is a vast mischaracterization of the current situation. 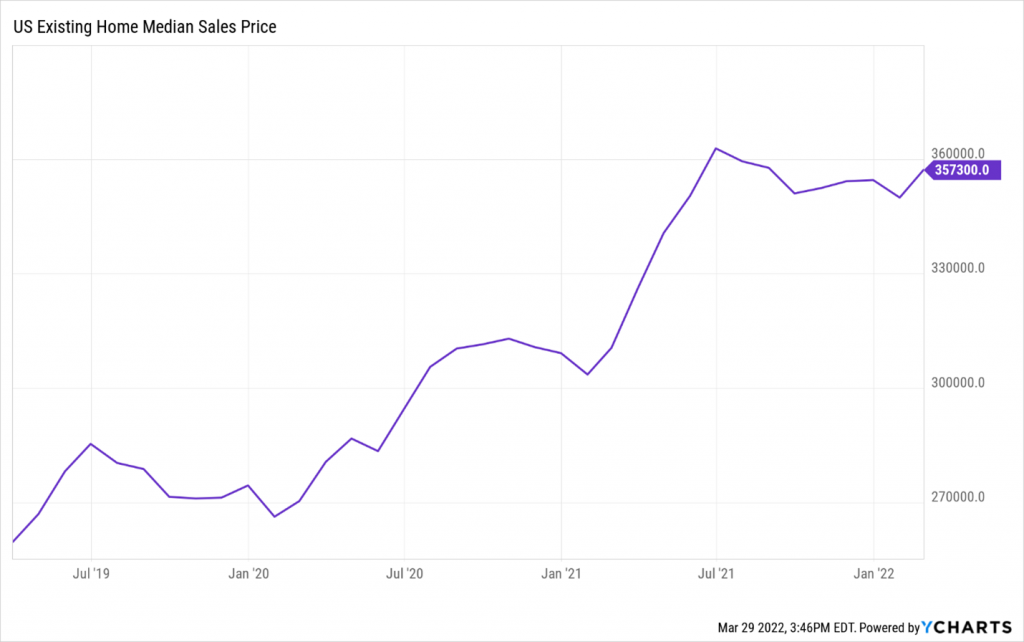 Remember: Opendoor’s average holding period is about 60 days. Therefore, if Opendoor were just “following the market,” its buy-to-list today would be around 0% since median home sales prices haven’t changed over the past 60 days.

Instead, Opendoor’s buy-to-list premium is soaring to 17%. That’s a very impressive 17-percentage-point outperformance of the market.

Clearly, Opendoor isn’t just riding a hot housing market. The company is doing something right to out-execute the market.

That something right is rooted in Opendoor’s pricing algorithms.

I’ve long stated that a big piece of the Opendoor bull thesis is that this isn’t just another iBuyer. It’s a tech-driven iBuyer that’s hired an army of expert data scientists and coupled them with an ever-expanding trove of proprietary housing market data. Opendoor has built world-class home pricing algorithms that are better at predicting home prices than anything else in existence.

How else is Opendoor rattling off a 17% buy-to-list in a flat price market? How is Opendoor driving those 17 points of pricing outperformance?

The only reliable answer is its elite pricing algorithms. Opendoor bought homes in late 2021 that its algorithms showed were dramatically underpriced. It fixed those homes up and is now selling them at huge premiums.

That’s the power of Opendoor’s core pricing algorithm. It’s a scalable “ninja skill” that is highly defensible and exceptionally durable. And it’s one that won’t just allow Opendoor to dominate the iBuying space. It’ll enable it to succeed in hot, cool, and flat housing markets.

To that end, I believe Opendoor’s soaring 2022 premiums aren’t just a near-term bullish indicator but a long-term one, too. They give me faith that this company can reshape the housing industry in a way no other iBuyer can.

If Opendoor succeeds at this, then Opendoor stock won’t just double by the summer. It will rise about 20X over the next decade. And it’ll turn patient early investors into millionaires.

The Final Word on Opendoor Stock

The big question mark surrounding Opendoor stock never had anything to do with whether consumers were willing to buy and sell their homes online. They are unequivocally willing to do that. That’s why Opendoor has grown revenues by more than 450% year-over-year in every quarter since early 2021.

Rather, the big question market surrounding Opendoor stock has been whether the company can sustainably make profits.

But that question now has an answer, too. And it’s an indisputable YES.

Thanks to Opendoor’s exceptional algorithms, it’s listing homes for 17% above what it bought them for 70 days prior. And that’s despite median home sales prices across the U.S. being basically flat over that same stretch. This proves that even in a flat price market, Opendoor can achieve gross profit margins consistently north of 15%. That’s far more than enough to produce 5% to 10% net profit margins at scale.

In other words, we now know that Opendoor can be consistently profitable. Couple that with the fact that we always knew Opendoor is going to grow like wildfire. It’s become crystal clear that Opendoor stock is a huge long-term winner.

If I was forced to buy and hold one stock for the next five years, I’d pick Opendoor without hesitation.

By then, I’m calling $100-plus prices on Opendoor stock.

But Opendoor won’t be the only tech stock that surges over the next few months and years. Our research strongly indicates that after being beaten down the past few months, tech stocks are staging an enormous comeback. We think this revival could turn into the biggest rally for tech stocks ever.

Dozens are due for 100%-plus gains over the next several months alone.

Find out which tech stocks we’re talking about. And put yourself in a position to make big money over the coming months.